In this short tutorial I want to demonstrate three different ways how to achieve a fully responsive column layout with only CSS and no JavaScript. And by fully responsive I mean a layout that is responsive without the necessity to specify media queries for specific breakpoints. We will touch a flex version, a grid version and a less familiar columns property of CSS.

Let’s start with this one, because it probably is the most interesting and at the same time least known version. The CSS columns property is responsive by design. It is a shorthand for column-count and column-width.
column-count allows you to define the number of columns that should be visible. column-width defines a minimum width each column needs to have. The browser will evenly distribute the available width into columns of at least this min width, and if there is room for another column it will automatically create that one.
When using the columns shorthand (or declaring both properties), column-width acts as a min width per column but column-count acts as a maximum amount of columns that will be rendered. For example columns: 3 200px; will create a layout with three columns at most, but each column will always be at least 200px wide.

Sometimes you want to display content that should not break between columns, for example if you want to put cards into columns for a dashboard. For this scenario there is the break-inside CSS property. And with break-inside: avoid you prevent single elements from being split up into different columns. (You can find an example for this in the Previous example on stackblitz)

There are a couple of additional properties that are not yet supported in all browsers, for example column-span to break the column flow temporarily (e.g. for content/chapter headings) or column-fill to define whether the content should fill all available height or evenly distribute (only if a height for the entire column is set).
If a height is specified the content will overflow horizontally if content exceeds space limits, which may be ok depending on the situation but sometimes may not. Can be tackled with a media query based on the height or an outer vertical scroll container.

Now let’s have a look at the grid version. The first difference is in the required setup. You actually need each column to be in a separate HTML Element, so having a big <p> tag and trying to split it up into multiple columns is not going to work with CSS grid.
I assume you are familiar with the basics of CSS grid.
The grid-template-columns property supports an repeat function with two parameters. The first parameter is the amount of times the element should be repeated, the second property defines the width of each element.
With the minmax function we can define a column width with a min- and max-width and using the 1fr unit for the max value will make this layout responsive. Using the auto-fit property for the amount of times parameter, will create as many columns as needed to fit the content inside the columns.

If you have more elements than columns (because the browser width is smaller than all the min-widths of the elements combined), the elements have to be put into multiple rows. Since all elements inside a row share the same height, there might be unwanted white space between the items. 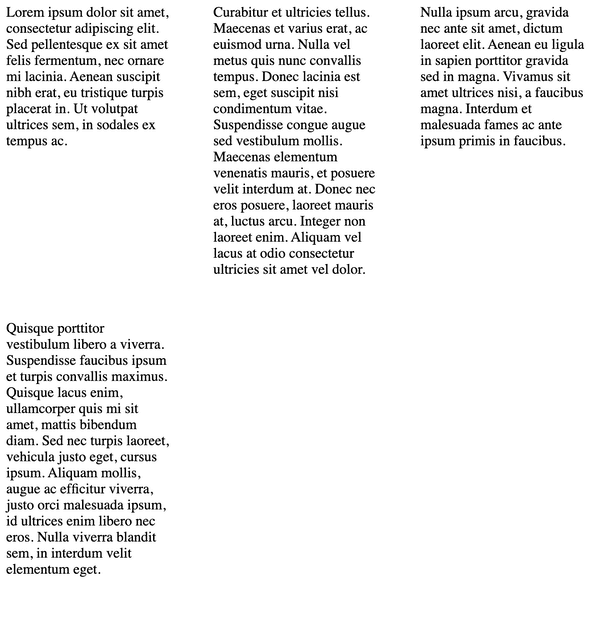 For a long time flex has been the I-use-this-for-everything property because it was the fresh new stuff. Let’s check if we can create a similar layout with flex as well.
With the flex-basis property (third parameter in the flex shorthand) we can set a min-width for our elements. With a zero value for the flex-shrink property (second parameter in the flex shorthand) we prevent the elements from shrinking below our desired min-width.

By the nature of flex, it will always scale to the full available width. If the first row only has space for 4 elements, the fifth element will be put in the second row but stretched to the entire width.

As far as I know there is no workaround to prevent this kind of behaviour (since this is supposed how flex should work) that does not involve media queries.

If you are expecting a final Use this approach answer, I have to disappoint you. Ultimately it comes down to your specific requirements. Secondly, I know that some drawbacks can be patched with the proper media queries - but I was looking for a solution that does not involve any. Why use one option with media queries or other workarounds, if another option does the same job just as well but without the extra effort.

Let’s look at our last example with flex, if your design does not allow for different widths in the last row this approach might not be the best solution. However, with CSS Media Queries on the horizon, this might actually be a neat and certainly will bring freshness (that would not be possible with grid) to the layout if you can style the elements based on container width.

If you have a fixed amount of elements that you want to evenly distribute into columns (and rows) and want a grid look - elements in the rows should have the same height - then option two is probably the way to go. Also grid has a lot of advanced features like sub-grid which can be used to align stuff in different columns on the same vertical level.

If you want to split up a paragraph into multiple columns I definitely would recommend option one. It’s also a good choice for cases where you don’t want white space between multiple elements inside the same columns, so it does not look/feel like a grid - for example for a pinterest-like layout.

So far I mostly used grid simply because I’m the most familiar with it, but I definitely will try to use columns more often in the future (and try to build designs that allow me to do that). I love the simplicity of it.

Let me know what kind of experiences you’ve made with either of those (or maybe even completely separate) approaches.

There are no comments available for this blog post yet